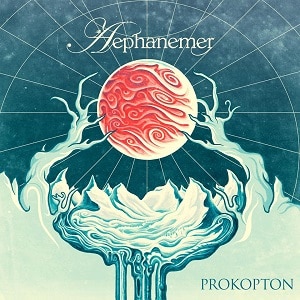 I never thought metal can be this exciting only because of the guitar riffs – I was more used to either classical singing, classical instruments, or folk instruments being involved as well, thus making the music highly enjoyable. And then Aephanemer came. Even though the guitar riff is the basic element of any metal song, before discovering this band it was hard for me to enjoy something solely based on the riffs. The French band and mainly their composer is gifted with such a good feel for melodies, which, topped with an immense love for melodic death metal results in some genius pieces of metal music.

I became enthusiastic and then hooked to this band with their debut record, Memento Mori from 2016. They started to gain some fame with it, mostly through internet sharing and Youtube’s algorithm of recommending similar music, which luckily also recommended me their album, which I downloaded really fast so I could listen to it any time, and then fell in love with the melodies so much I ended up purchasing the album.

It was about time for the band to get some proper international recognition, especially after they won the French Wacken Metal Battle and got a spot on Wacken last summer. Now they are aiming even higher with their 2019 record called Prokopton. You could say that next to the boys and gals, half Fennoscandia was working on the album as well, since it was mixed by Dan Swanö (Unisound), mastered by Mika Jussila (Finnvox) and the cover art was made by Niklas Sundin, so Prokopton aims at the best possible quality in every way.

To be released in the spring of 2019, Prokopton offers us 8 pieces of music going 44 minutes, from which one could be kind of regarded as a somewhat overlong interlude, At Eternity’s Gate, so let’s leave that one at that.

But let’s look at what else is there to evaluate. The record has a bombastic start – Prokopton starts playing with a short intro only to make the listener more alert and curious about what is going to happen, and to provide a grand entrance. There is no disappointment, after this unnerving wait, the song starts “for real” with one of the best riffs of the whole album that completely hits you in the head and leaves you headbanging like crazy. Not only headbanging but it also probably makes the metalheads smile, since it is such a cheerful and satisfying tone and sound. Aephanemer is a band that expresses rather the happy side of melodic death metal than the somber, which is pretty cool. And then, the playful game of the cymbals stops, the riff goes on and we can hear the powerful harsh vocals of Marion Bascoul (yes, she is a girl if that is of any importance).

One of the things I heard quite early is that when the guitar gives some room to other instruments to carry on the main melodies, some of the other instruments and sound effects used there make me feel like I am listening to some demo created in Guitar Pro. Maybe this is intended, maybe it isn’t, maybe it is just my own pair of ears that pick this up, but I had to associate it with a “demo sound”. Luckily we can welcome back our good old friend guitar pretty soon.

The second thing that struck me was that during listening to the first 3 songs, I didn’t really register when a song ended and when the next one started because they seemed all too similar. Not in a Be’lakor – Of Breath and Bone type of similar, where they intended to use the same musical motifs at different places in the music. Prokopton, The Sovereign, and Dissonance Within feel similar rather in a way where one would think that the band didn’t really dare to expand their creativity further, take the extra leap and be brave about their usage of melodies and choosing the tone or the keynote, and in Dissonance Within, we are greeted with that demo sound again for a short while. But this is very much excusable in this song because in its final minutes you can hear one of the best motifs of the whole album, I almost wonder how that genius guitar riff wasn’t a base for a completely new song. A cool, refreshing part that made me actually rewind the song a couple of times just to listen to it again, because that almost hymnic bit is just. so. good.

After the already criticized interlude, we get “Back Again” with a song that indeed sets us back on track. No, it is not really about a trip you take, neither about the Hobbit (or so I think), but the song has a rather philosophical meaning about fighting with one’s own conscience and finding ourselves after some problems. I would recommend everyone looking into the booklet and reading the lyrics because they are really great and super poetic. This song is probably the least happy sounding on the whole record, there is more thrashy, harsh guitar and it suits the track so well! The bridge part of the songs somewhat reminds me of the world or of some role-playing video games, where, again, only the way it sounds leaves something to be desired.

Apart from the great guitar part of Dissonance Within I already pointed out, and the “overture” of the album, another favourite part of mine is the first seconds of Bloodline, with a musical part that could be almost like a trance song, it definitely has that rave vibe to it, I wish it went on along the whole track, creating some kind of electronic metal song as a result. Of course, it is not bad this way either, with its several rhythmic “games” and even a surprising blastbeat. There are guitar riffs that could also be those of a folk metal song, and this song has my favourite guitar solo. I really much appreciate the fact that even though Martin Hamiche is obviously really good at playing the guitar, he does not bore those less guitar-nerdy listeners with overly long guitar solos.

The album is closed by a nine-minute-long opus, about which I feel something similar to what I said about the instrumental interlude: it is a bit long, half the length would suffice. Of course, you can understand and forgive this, the complex thoughts and musical parts needed the length to be correctly expressed, and even running this long, If I Should Die is one of the most exciting songs of the record (along with the title track). The various guitar bits are really nicely built and then expanded, and there is no demo-synth-sound, but we do get some nice piano as decoration to the parade of riffs.

Even though it is not the task of an album review to compare a record to its predecessors, I cannot not say or think that Memento Mori was somehow better (or maybe I just got too attached to it). For some reason, it feels that MM had more creativity to it, but still, even regarding this, or exactly because of this, Prokopton feels much more mature and complex, serious, but still extremely focused on melodies. Aephanemer’s Prokopton is definitely one of the greatest, most fresh and surprising albums of 2019, heavy but still not burdening to listen to. An OBLIGATORY listen to anyone who likes Children of Bodom or Kalmah.

That’s how I would describe it: metal is the dark side of music

‘If you don’t know the rules, you have no way to break them’ – interview with Andreas Kisser

Interview with Ashmedi of Melechesh

“Joining The Agonist made me learn growling” – Interview with Vicky Psarakis